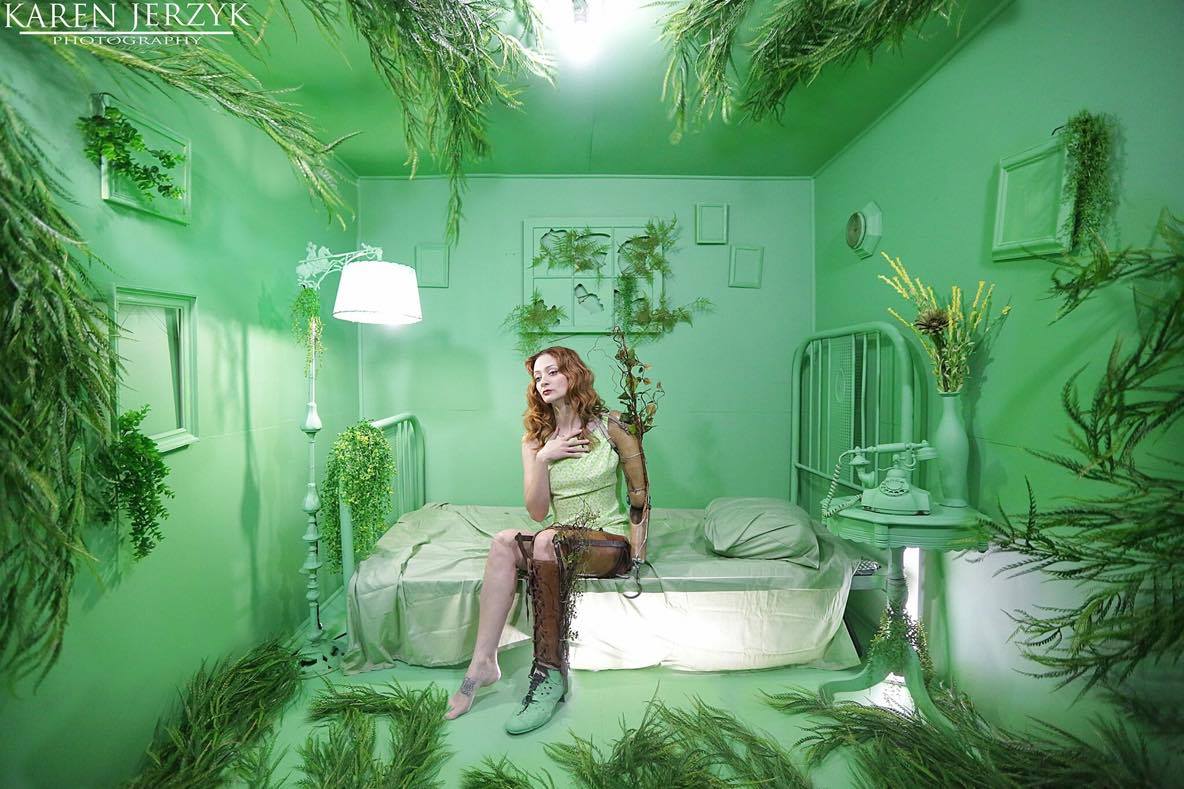 Posted at 22:00h in Blog by Samantha 0 Comments
Share

Hey guys, I’m super excited to be doing some artist highlight type posts. Last year I did a “30 Days of Inspiration” month where each day I highlighted a new artist in which I interviewed. I met so many amazing people by doing that and their art is truly amazing. I wanted to start doing some interviews again and introduce some awesome people who’s work I truly love. This post is all about Karen Jerzyk.

Karen is an internationally published photographer from the Greater Boston area. Her work is twisted and crazy in the most beautiful and interesting way. I came across Karen’s work a good few years ago and instantly befriended her. I’ve never met someone else who was so darkly creative and could pull it off without it looking cheap. Even though her work is dark in nature, they often have a very vibrant color pallet. She stretches and contorts reality with interesting perspectives and illusions. I would strongly recommend viewing her work on her website.

Karen recently just completed an amazing color project, which incorporates 11 images in a single room and some wonderfully strange untold stories. Here is what Karen had to say about her newest series “Colors”.

What inspired you to start a project on colors?

Like most of my ideas, it was random and had nothing to do with anything. When I first had this tiny room built for me in my basement (just shy of 8×8 feet) I had tried to choose a neutral color to paint it. For some strange reason I chose a dark blue- I think I meant to choose grey but the color search looked different in the store. So, I painted it in January. A few months went by and I didn’t utilize the room for anything- maybe subliminally I knew that I was going to do this whole color series and that’s why I didn’t mess with it after painting it.

I have a lot of old props laying around my basement and unfortunately sometimes in the yard. So my mother, who lives with me, was sick of Loki g at this gross 1980s TV that was in our driveway for over a year and I was going to put it on the curb- I live on a busy street and I could legit shit on the sidewalk outside of my house and someone would pull over and take it- assuming someone would take it, but then I was like “oh shit, what if I sort of trashed this myself?” And my idea of trashing it was just painting it blue, like the room.

Then I thought it would be cool to paint EVERYTHING in the room blue. I have so much excess furniture props that it wasn’t a huge deal to paint a few pieces of furniture (although it killed me to paint some of the antiques). I even dyed a dress blue and the shittiest thing is I also spray painted a taxidermied parakeet, which was gross. I spray painted a taxidermied (is that even a word?) crow for my pink photo and I kept calling it the pepto bismal crow. So disgusting.

Was it difficult finding ways to portray each color?

It definitely was, and I didn’t want to get super cliche with it, or make too much of an attachment to an emotion that’s usually portrayed by a certain color (as in red for anger, green for envy, etc). I sort of tried to do the opposite of what I thought people would assume from each color.

What was your process for setting up these images?

For some of them I sort of had a set idea, I didn’t for some and kind of made it up as I went, or I DID have a set idea and it would get all fucked up in the process (which only happened to one). Pink, purple and green are good examples of having no clue what I wanted to do and just kind of made it up as I went. Red, brown, blue, grey, yellow, white and orange were examples of which ones I knew exactly what I wanted from, and black was a total fuck-up, which was ironically my self-portrait.

What does each image mean?

As with most of my photos, I don’t have any set meaning for any of the images. To be honest, I kind of just get ideas as I go, and work off my gust instinct. It’s like my body and my brain are talking in morse code that I don’t even understand, I just do what I feel is aesthetically satisfying. In terms of meaning this series was the LEAST symbolic of any sort of stories or background, which I think actually opens up more doors in terms of a viewer looking at the image and coming up with their own conclusions.

This was more of an art installation first/photo second. I would set things up that I thought fit best together and were aesthetically pleasing, then sort of build off that. I was sort of manic when I was doing these, like Richard Dreyfus building Devil’s Tower in Close Encounters Of The Third Kind, and I became obsessed with finishing each one in a day, usually a few hours before the actual shoot.

Which one of the series is your most favorite and why?

It’s hard to choose a favorite, there’s definitely different elements I enjoy in different ways for each one. I really feel that they all go together the best as a collective whole, to be viewed all at the same time rather than single them out.

Which set was the most memorable to you and why?

To be honest, they were all sort of memorable to me in their own ways because I’d spend so long staring at each one. Certain ones had certain feels, and it was definitely weird to go down to my basement and see that area with the room in it. It was hard to believe it was the same spot each time.

Did you come across any issue along the way?

When it started to get hot out, it started to really suck. I started with blue in April and the weather was perfect. Once late June/July hit, I was absolutely melting my ass off. Just POURING sweat. Which is why I want to blow my brains out when people think I photoshopped the colors in the images, it would take me about 12-15 hours to complete the room for each photo, then an additional 2-ish hours to set up my camera and lighting.

My black photo was supposed to be totally different- but it was so hot and everything was getting so fucked up that I changed everything up while I was doing it. My kitty Max was also being a complete dickbag during it, which didn’t help. Also, I destroyed my back yard doing this. Paint all over the lawn and trees. It looks like a rainbow shit on a hillbilly’s already gross lawn.

Why did you choose the colors you chose?

I knew this was going to be pretty hard work, so I tried to stick with basic colors that aren’t variations of something else. I didn’t want to get into silver and gold, or a light red or dark green and neon green and all that jazz. Then I get into a realm of doing the same series for probably over a year, and I wouldn’t have time for much else. I like to do projects and move on. I’m happy with the amount I chose- I was pretty spent at the end and although I had fun and loved doing it, I absolutely needed to stop.

You worked with a designer for these images. Who is she and why did you team up with
her for this series?

Ashley Rose. I work with her a lot- we definitely have the same vision and aesthetic and we always work super well together. I was psyched when she was a part of some of the colors.

Last but not least, any funny or crazy stories that happened during this series?

The first time I used a spray fun (I hand painted blue back in July but bought a spray gun in April for the other ten colors) I didn’t wear goggles and a mask. Just went at it. My lungs legit hurt the next day, and because I didn’t put a tarp on one of the doors until after I did white and purple, a draft had pulled all the paint dust up into the normal part of the house and left this shitty pixie dust EVERYWHERE. Anytime I used my cats they were complete assholes. For orange, I had one of those I’ve smoke grenades that’s used for paintball and shit.You pull the pin and smoke pours out, easy enough. I planned on letting it go for a few seconds and then throwing it into a water-filled garbage bucket I had waiting close by right off camera.

Easy enough, right? No. The thing starts sparking like a motherfucker and I was like oh shit everything’s going to catch on fire. So I take a few photos of the smoke as planned and drop it in the bucket that’s filled with water. That should douche it out, right? No. The motherfucker STILL smoked under the water, at which point pure horror and panic set in. I run out of my bulkhead with this bucket DOUCHING the sky with orange smoke and I’m like holy shot what do I do? Pretty are smoke bombs are illegal in NH and the neighbor across the street from me is of course a fire man. AND I live in a busy street.

So I look and my eyes zoom in on these cinder blocks and I plugged the hole to the bucket up with a cinder block. Christ. Never doing that shit in my house or yard AGAIN.